um yea this is what happens when i try to resume game  and it just freezes there so :/ 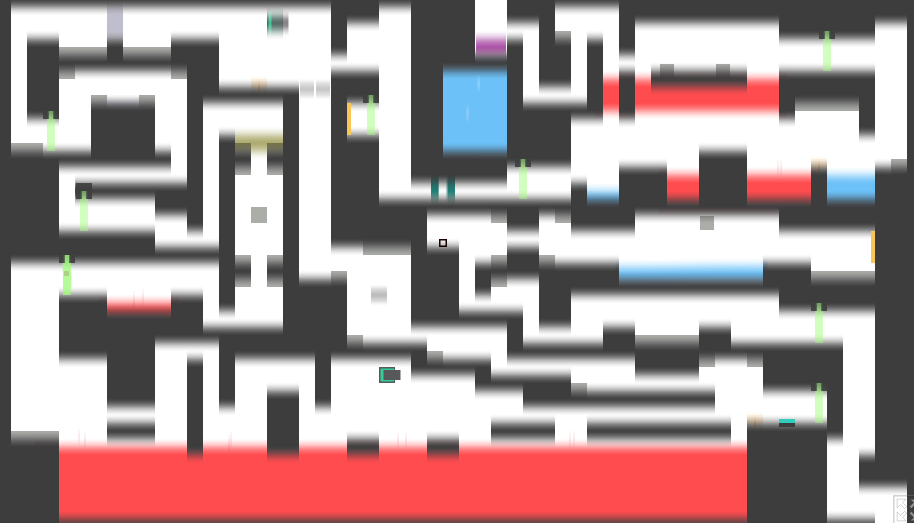 I do not know what happens to the game

This is game is SUPER FUN

It took me alot oftime tho How do you post the time? 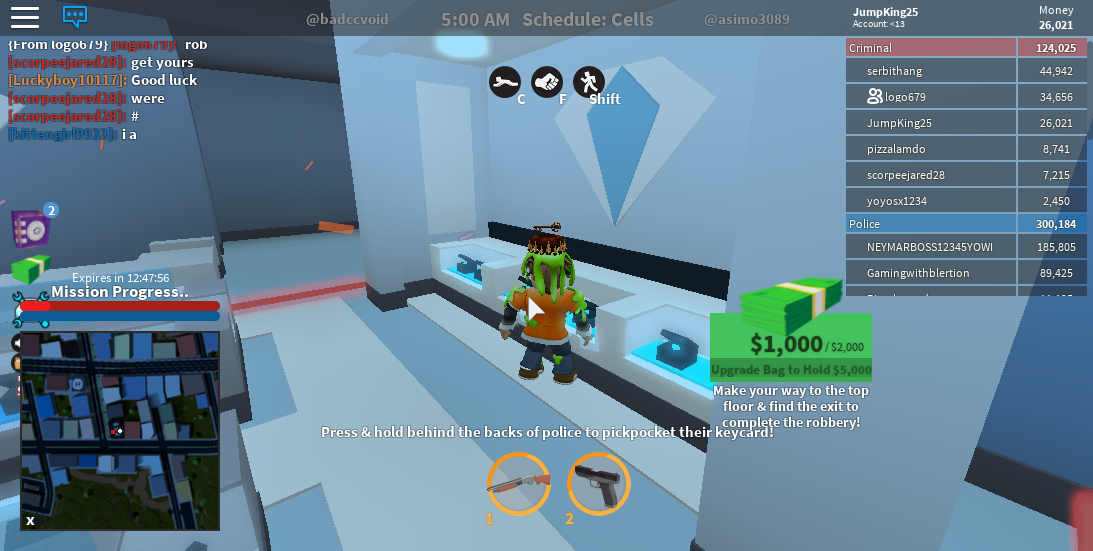 why is there a roblox screenshot? 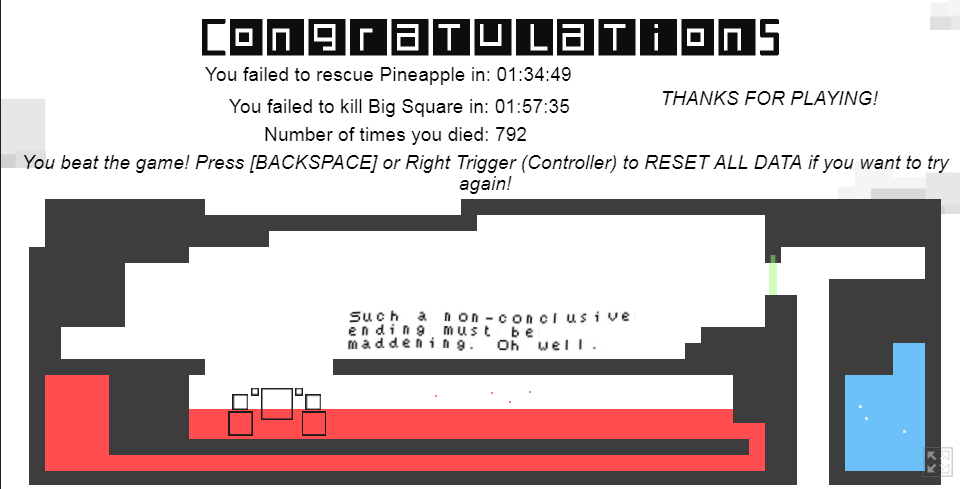 EvilObjective is good at making it, I'm good at breaking it.

+If any of these are intentional, then reply. =)

Go in Portals, No Effect Glitch

Start on the second floor (or any floor with portals), and get in a portal. Then go the opposite way of the portal. There, you're not teleporting in the portal.

Failed to die more than 162 times in half an hour

this is such a fun game. I keep coming back to it, and still haven't completed it.

Best time yet! I only took 14 seconds to get down the tower! And that's the least amount of deaths yet! Every other time, I got over 300 deaths, at least, and for me to annihilate that makes me so happy! This is why I love rage games. You guys should keep making more BTTS games, forever and always. I think that if you make enough, I'll do a YouTube video or even a series on it, including as many of these games as possible. You guys did amazing with this one and even better with BITTS, so keep on going, and always remember to have a PMA!!! 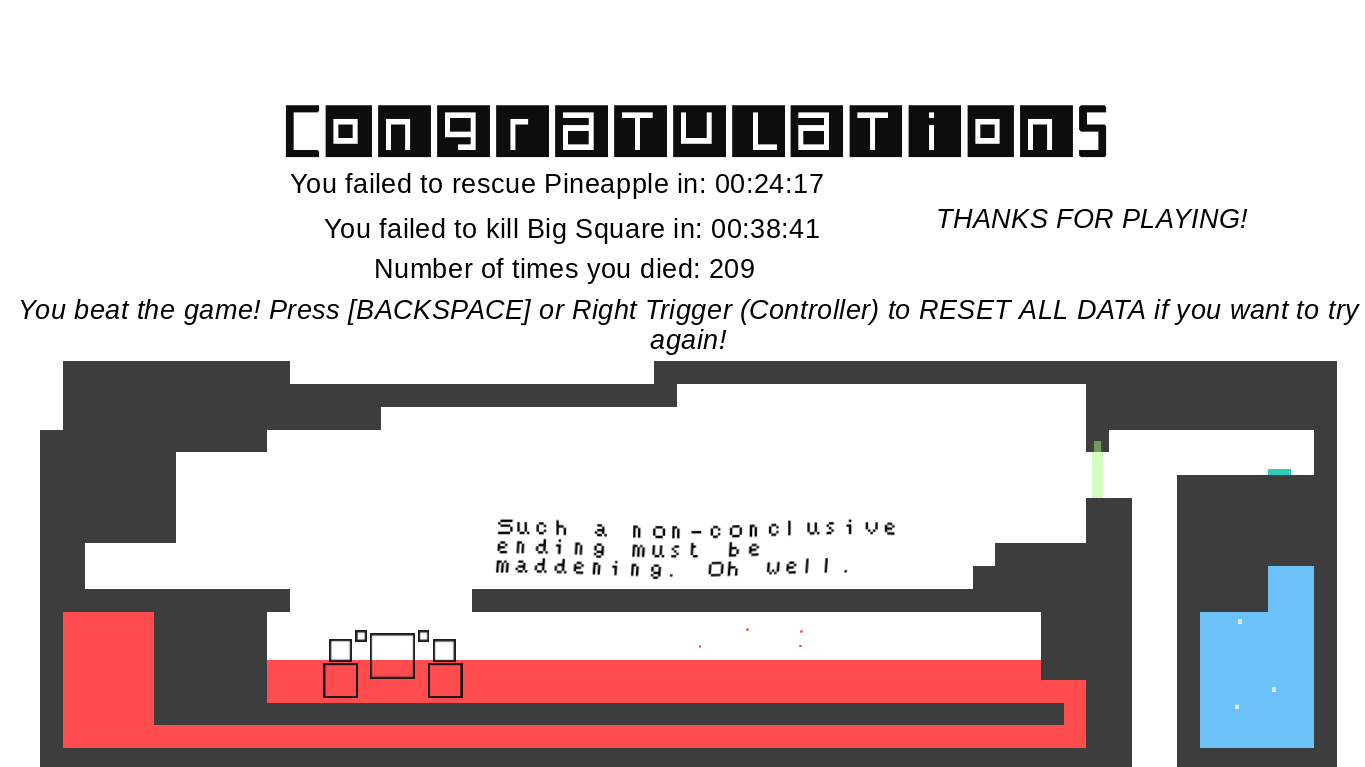 hello evil objective I thought it would be cool if you could collect skips in hard destations in levels to skip them hard level.

p.s. I love your games

Thanks for playing! I'll look at something like that in future releases :)

It didn't save in the browser, bought it thinking that would probably help, but its not for mac :(

Would've been nice if it said so in the description, it probably said in all the mumble text later on, dunno, but still.

Glad to support it though, it's a delicate game!!

Thanks, I look forward to that!

And about it not saving in the browser, isn't it supposed to do that? Maybe it's because I use Safari? I do that bc it runs much better than any other browser on mac, but maybe it treats cookies differently or something, if that's how it saves...

The web versions uses local storage for saving, which is independent of cookies so clearing cookies/not saving cookies normally shouldn't matter. However looking into this it appears that Safari throws a javascript error when using local storage in private mode. Are you using safari in private mode by any chance?

The Steam version automatically saves using Steams cloudsave functionality so it won't be a problem on that version.

No, I'm not in private (incognito?), only use that for other stuff... I've tried to test this, and it did remember my progress after just refreshing the site, but i think it was yesterday i tried that and today its forgotten the progress again. So it seems to happen over time. I'll try to see what happens in Chrome.

EDIT: I'm in chrome now and it seems i already quickly tested this last time, cause i started from the first checkpoint, so in that case it could look like safari is wiping the local storage after a while. Now I cleared first stage to test it so we'll see if chrome remembers that. Temporary conclusion: don't use safari for this game.

EDIT 2: Confirmed, Safari erases the data after a (very) short while, Chrome remembered most of the checkpoints in the stage, though i cleared the whole one. Firefox probably works the same way. Opera doesn't erase the data, but transforms it into a Trojan horse. Netscape asks for the floppy disk to save on. Internet Explorer crashed when opened.

I did it with 92 deaths and 54 minutes for pineapple and 76 minutes for big square. BEAT IT PEOPLE! I got this on 4th attempt. 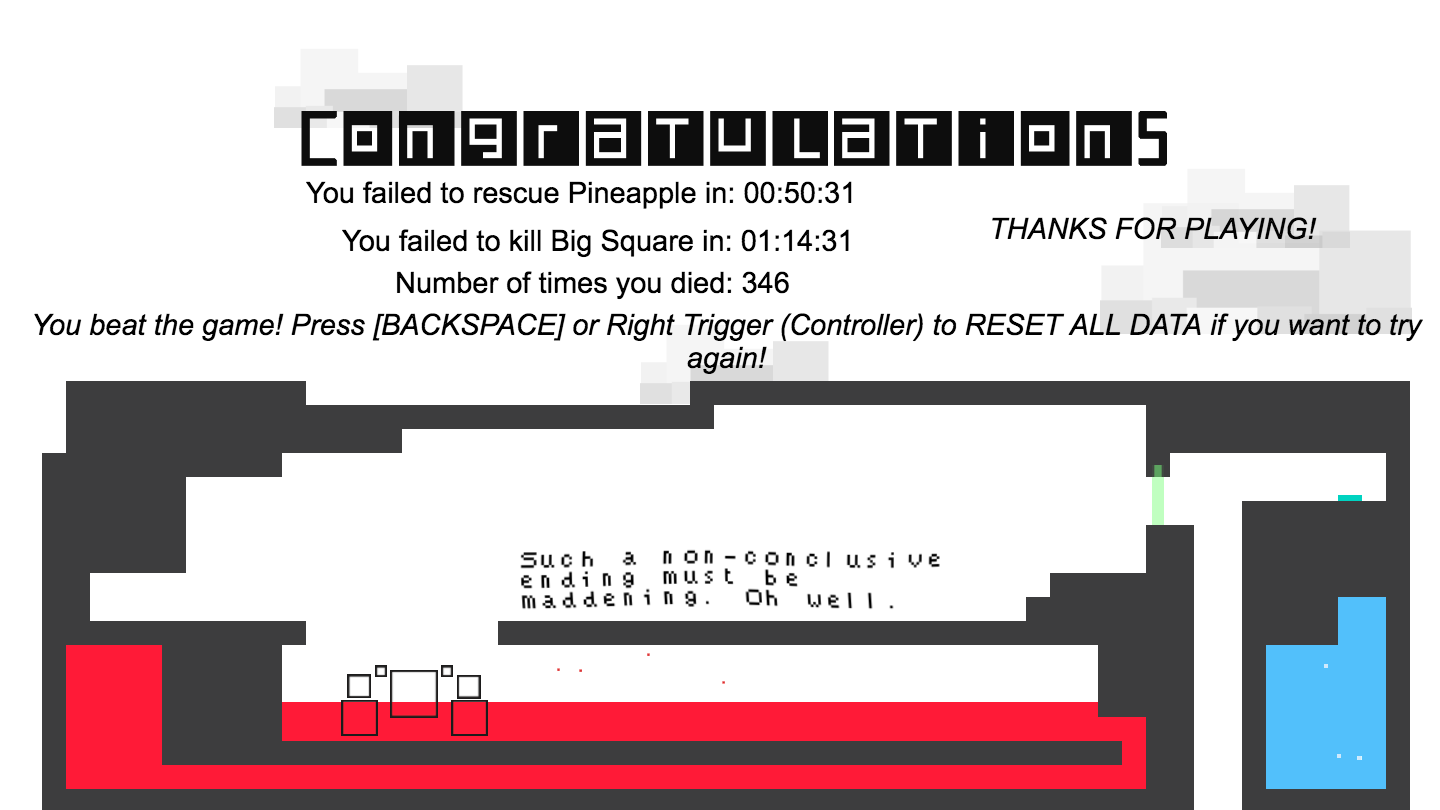 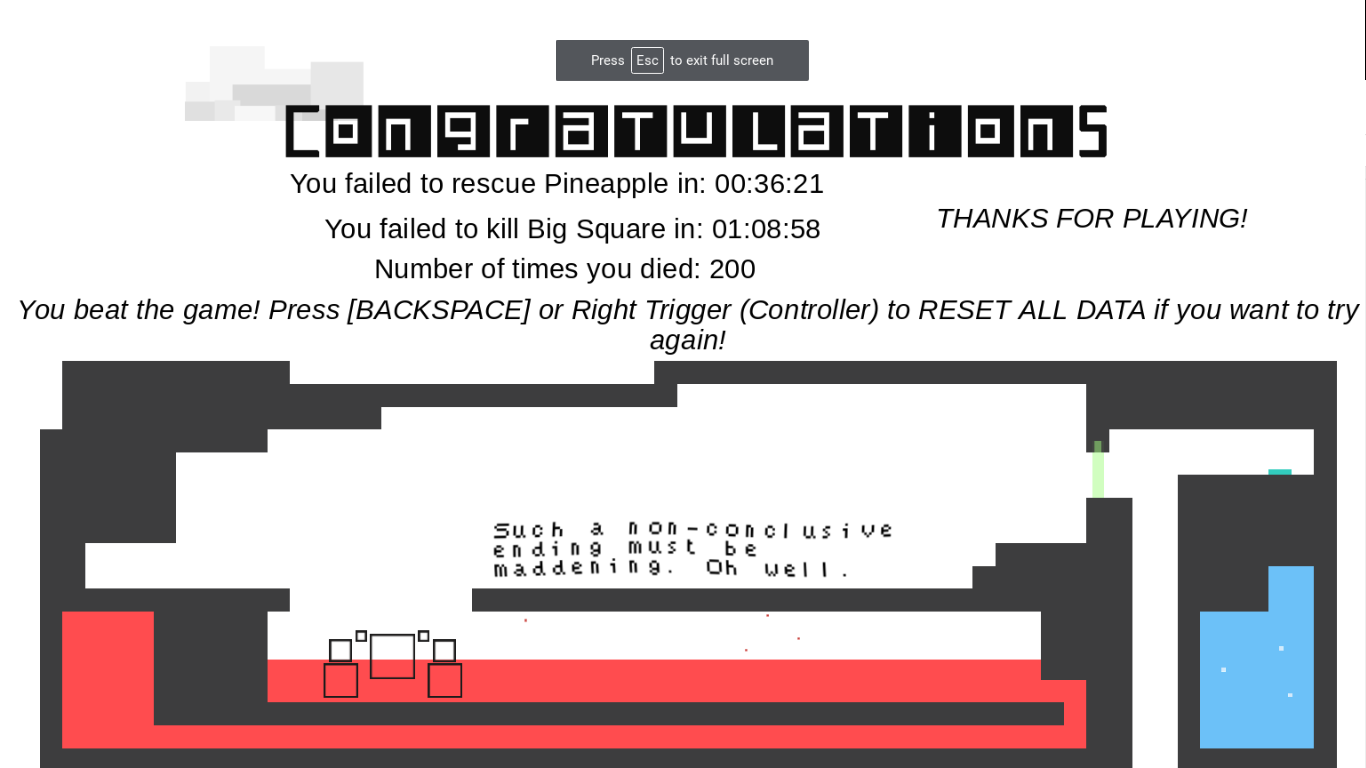 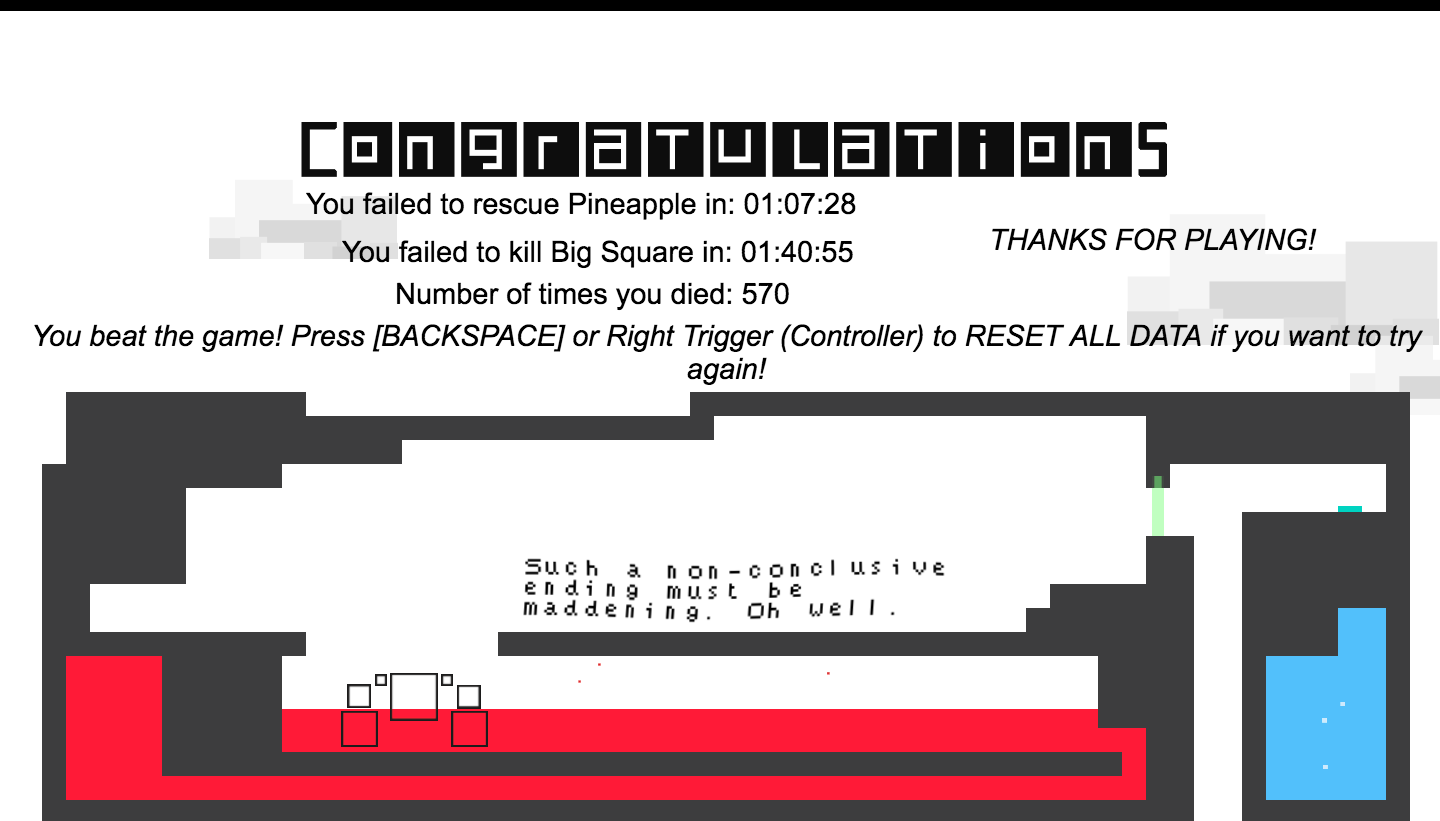 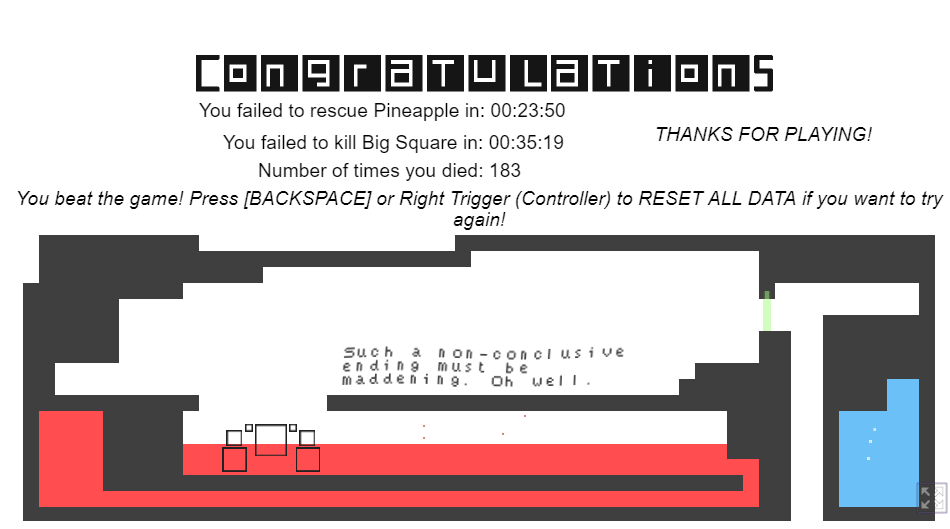 4th attempt not even joking :O Don´t think I can get much better :/ 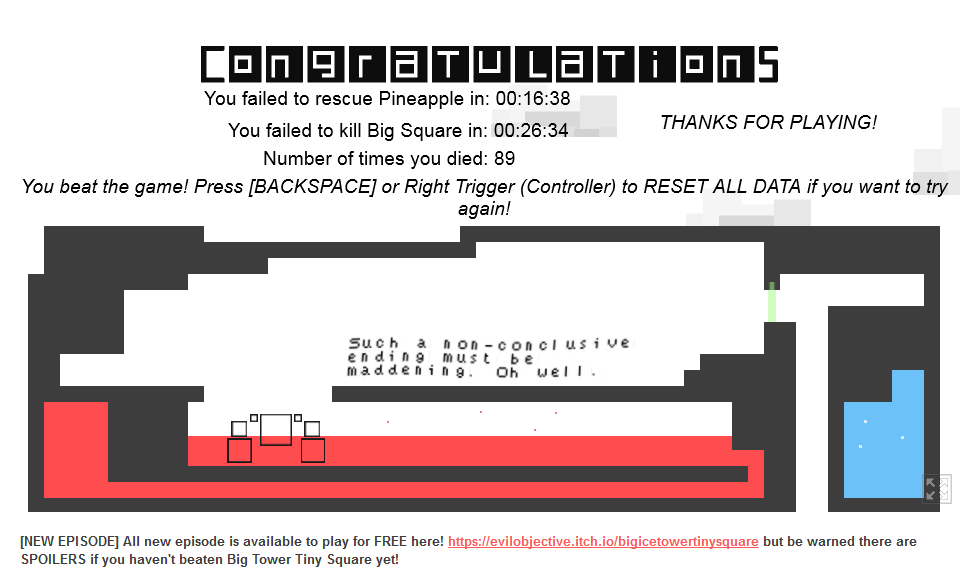 What a great time - you practically flew back down the tower!

This is a very good game. I give it a 9/10. It is pretty hard the first time but you find tricks and get used to the muscle memory in later attempts. All my friends know and play this game at school :-)

This was my 8th attempt vvv 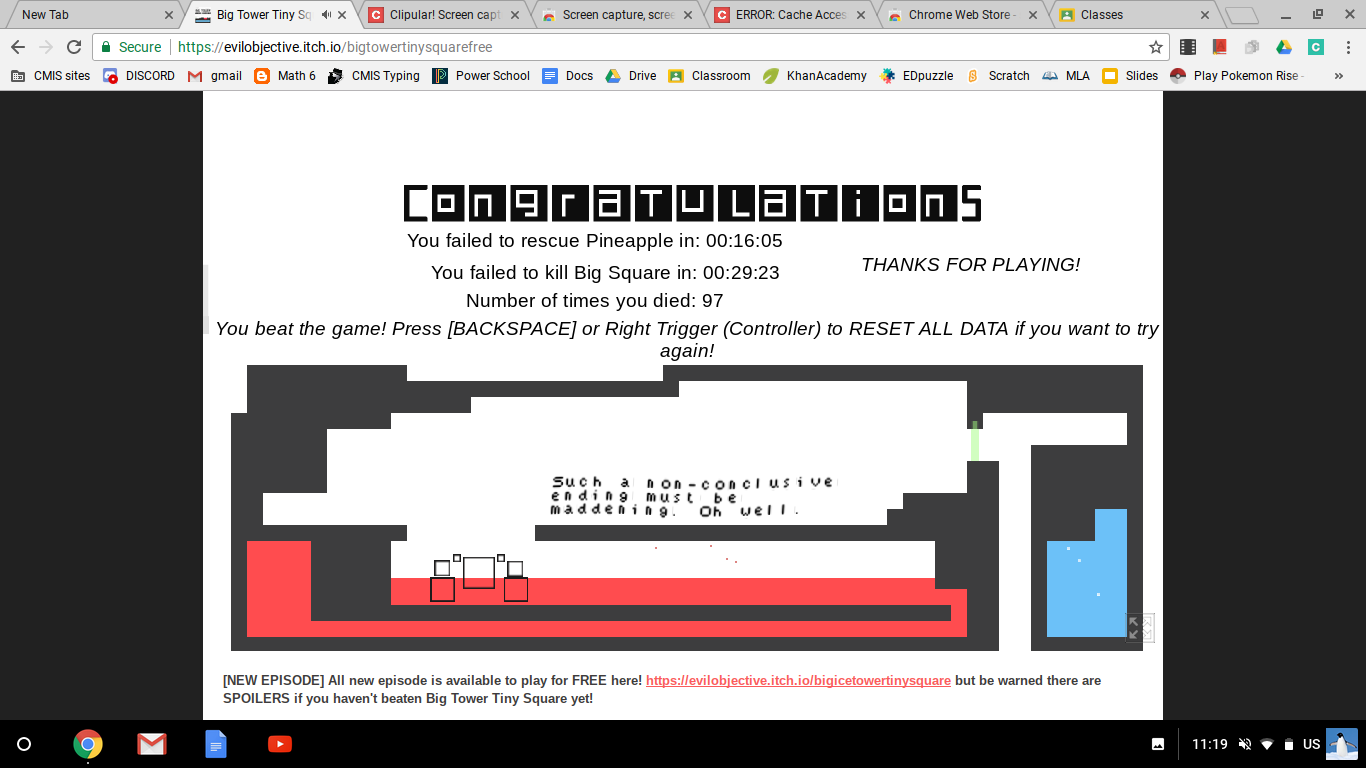 That is a really good time!

It wasn't really that hard. It's like an easier version of I Wanna Be The Guy with a very Super Meat Boy-ish style (I have to imagine you took some inspiration from SMB). And to anybody who thinks IWBTG and this game are hard, you're mistaking tedium for difficulty. No, this game is not hard. You wanna see hard? Play I Wanna Be The Boshy. That game is ridiculous. That game will crush your soul and make you weirdly good at tight platforming. But mostly just crush your soul.

Anyways, if you pay attention to the level design, there is a puzzle in every room (or in this case, multiple puzzles), in the format [tedious part->tricky part]. Your job is to figure out how to get through the tricky part. The tedious part just takes extra time (and sometime just consists purely of waiting), adds to frustration and whittles down your patience, unless you can stay calm and laugh off deaths. There are some hilarious ways to die.

The point is, you have to UNDERSTAND what to do to get through it. If you are just mindlessly trying to force your way through, you will be stuck for a long time. You need to form a strategy. You have to die a few times to learn what does and doesn't work. You also have to be willing to throw away chances at the tricky parts trying different things, like running off a ledge without jumping. Also, using a gamepad/wasd makes it a lot easier. If you're playing a platform hell genre game with the arrow keys, you are doing it wrong. Horribly wrong.

Also, unlike a typical platform hell, I didn't see any noob traps. Noob traps come after some of the tricky parts, and usually involve something like a random spike coming out of nowhere specifically to catch you off-guard, kill you, and make you do the whole thing over again. This game was completely fair.

Overall, the controls were very intuitive and I had a blast with this game. I beat it in about, let's see, 47 minutes with 332 deaths. But don't take my word for it. See the stats for yourself. 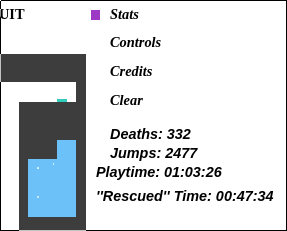 Props to you, EvilObjective. You did a great job. I'd give this game a solid 8/10.

Hi Braden thanks for the review. Not sure if you realized it but reaching the top of the tower is only the first half - there is the whole tower to climb back down in order to beat the game!

Yes, I beat the game, or "failed", as it was called. Up and down the tower. Got the "congratulations" screen and everything. I made the review after having created an account and logged in. The screenshot was taken during that time by looking at the stats from the main menu. If you're basing your assumption that I only went halfway on that screenshot, then there's probably a bug in your game.

Screenshot of proof Why did vsauce do this to me? 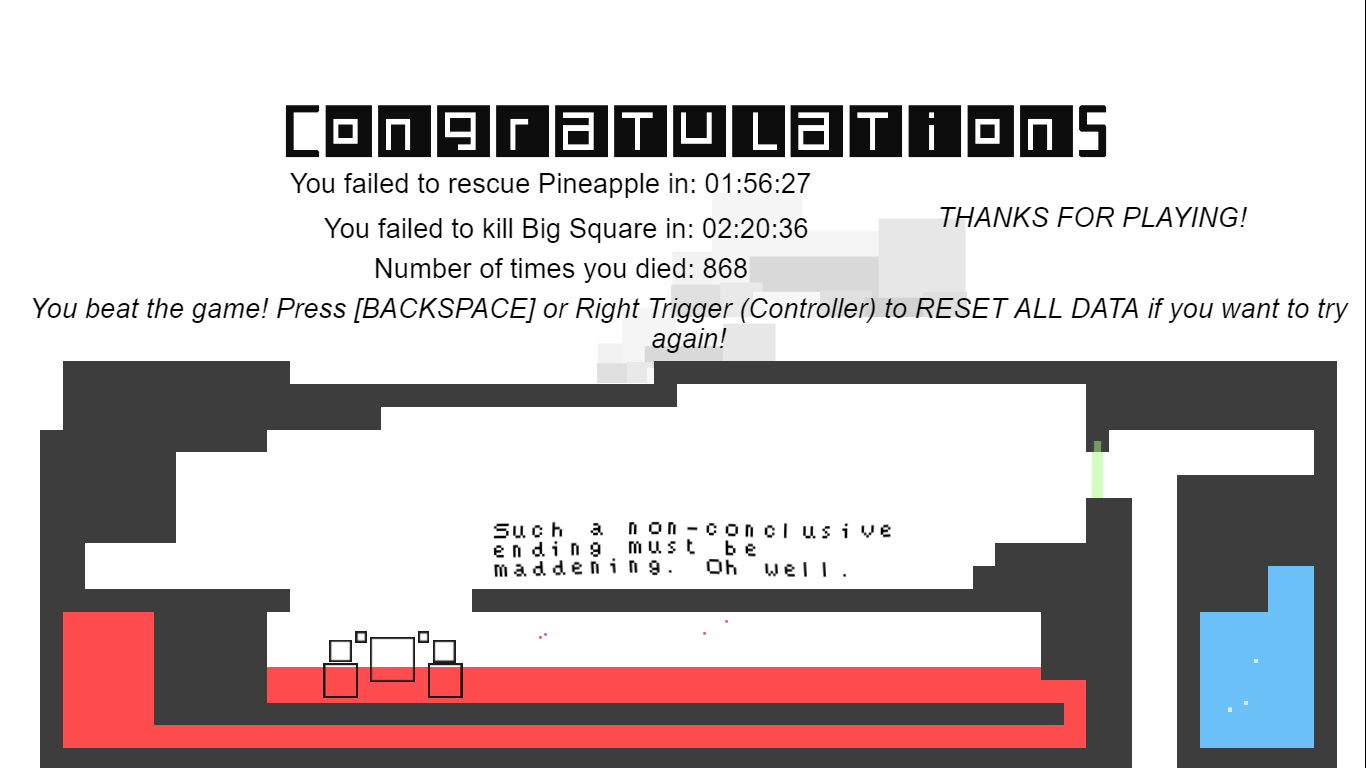